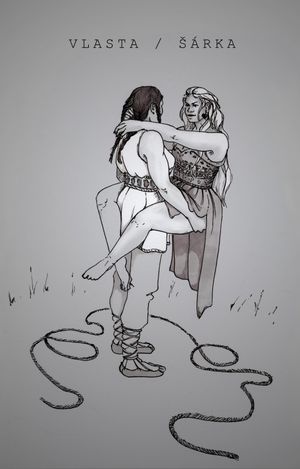 There is a rich and storied history in retelling (and sometimes outright fabricating) Old Slavic mythology to prop up a cause.

I've been a wee bit grumpy about the amount of queer rep in Czech history and literature, and I decided that what's good for my old bro Jirásek is good for me. Therefore I present you: Old Czech Legends, the mlm/wlw version.

(Unfortunately, it's all very tragic. I guess if I want happy historical couples, I'll have to invent them whole-cloth. Working on it.)

It's surprisingly hard to find a shippable male couple in Old Czech Legends! The damn thing is pretty sparse on men who aren't in the pattern of "horrible mean jerk / poor oppressed hero". (I mean, who would have thunk, given the above mentioned political goals.) Neklan and Čestmír were the best I could find.

Neklan was a pious and peaceful king, Čestmír was his brave beloved cousin. The kingdom was attacked; Neklan refused to wage war; Čestmír begged Neklan to take up arms, and finally dressed up in Neklan's armor and led the Czech army to victory, heroically dying on the battlefield. "Probably inspired by Achilles and Patrocles", wikipedia said. "Well! That's pretty gay, then," I said.

In contrast with the previous, Vlasta/Šárka might as well be canon. (Alas, also tragic.)

After the countess Libuše (previously the sole ruler) married Přemysl Oráč, women realized they're losing respect and authority and decided to rebel. This was called the Girls' War, and Vlasta was the leader of these rebels.

Šárka took part in Vlasta's trap set for a guy named Ctirad. She posed as a tied up victim to lure Ctirad in, then drugged him and his men, and the women killed them all.

It's all very "murder girlfriends" and pretty damn satisfying, even if it ends badly. (The rebelion is suppressed and all the women killed. Obviously. Women, don't dare defy your men! Blah blah blah.)